David Holmgren, co-originator of the Permaculture concept, published Future Scenarios in 2007, originally as a website, and then published by Chelsea Green in 2008 as a small book (126 pages). He explores four possible human futures as the two great crises of Peak Oil and Climate Change converge into what he has coined our energy descent future.  In my view, this is essential reading. Adam Grubb, founder of Energy Bulletin, characterized it like this:

These aren’t two-dimensional nightmarish scenarios designed to scare people into environmental action. They are compellingly fleshed-out visions of quite plausible alternative futures, which delve into energy, politics, agriculture, social, and even spiritual trends. What they do help make clear are the best strategies for preparing for and adapting to these possible futures.

Three years later, in 2010, Holmgren contributed an additional important essay, Money Vs. Fossil Energy: The Battle for Control of the World. Holmgren describes this essay as “a framework for understanding the ideological roots of the current global crisis that I believe is more useful than the now tired Left Right political spectrum.”  Like all of his work, it is based on a profound energetic literacy, and is quite startling and original, and “challenges much of the strategic logic behind current mainstream climate change activism.”

A year ago, in a December 2012 interview, Holmgren was asked:

What do you see as the biggest challenges in our struggle to control our resources today?

After a lifetime of focusing on the biological basis for existence, and then the energetic basis, I’ve now become more and more interested in money, ironically, after ignoring it for most of my life. On the downside of the energy peak, it’s actually the bubble economies that can unravel so fast, that become almost the most important thing in shaping the immediate future. That bubble economy is, of course, actually falling apart right now. So a lot of the mainstream sustainability strategies assume we have a growing and steady economy. Permaculture works from the basis that we can adapt and do these adaptions in an ad-hoc way from the bottom up, and we’ve been doing that essentially for 30 years without the support of government and corporations. I’m not saying that we’ve got all the answers, but there’s a lot of people out there who are modeling and have been modeling how creative responses are going to happen.

And now a year later, as 2013 draws to a close, David Holmgren has published a new essay (a 24 page pdf download), which is an update of Future Scenarios, builds on Money Vs. Fossil Fuels, and expands his new focus on money and economy.  The essay is titled Crash on Demand: Welcome to the Brown Tech Future. 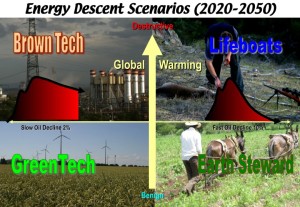 Six years on, of the four scenarios outlined in Future Scenarios, Holmgren is seeing the Brown Tech scenario as the one currently in play, where the decline of fossil fuels unfolds slowly, “but the severity of global warming symptoms is at the extreme end of current mainstream scientific predictions.” The political system is Corporatist, and emphasis is placed on replacing declining conventional fossil fuels with lower grade fossil fuels, which are both more expensive and also release more GGE (Greenhouse Gas Emissions), which exacerbates Climate Change even further. The introduction to this essay states:

David’s argument is essentially that radical, but achievable, behaviour change from dependent consumers to responsible self-reliant producers (by some relatively small minority of the global middle class) has a chance of stopping the juggernaut of consumer capitalism from driving the world over the climate change cliff.  It maybe a slim chance, but a better bet than current herculean efforts to get the elites to pull the right policy levers; whether by sweet promises of green tech profits or alternatively threats from mass movements shouting for less consumption.

In the extensive discussions about money and economy, the influence of systems analyst Nicole Foss (Stoneleigh -The Automatic Earth) and economist Steve Keen (Debt Deflation) are strong and freely acknowledged. Holmgren believes that deflationary economics is the most powerful factor shaping our immediate future.

The basic recommendation (as noted in the quote above) is not much different from what David Holmgren has been recommending for 30 years: to engage in a shift away from being a dependent c0nsumer, and toward being a responsible self-reliant producer for your household and community, and to shift a significant portion of assets out of the mainstream economy and move them into building household and community resilience. These actions not only put us in a more secure position, they also, if engaged by perhaps 10% of the population of affluent countries, might be just enough to shift our economies out of the perpetual growth paradigm we’ve been inhabiting since at least the industrial revolution, and is now only hanging on via  a rising debt bubble. The collapse of the current bubble economy will be painful. However, given that current growth is only being made possible by rising debt, we are not doing ourselves any favors by perpetuating it. As he had previously pointed out in Future Scenarios:

…without radical behavioral and organizational change that would threaten the foundations of our growth economy, greenhouse gas emissions along with other environmental impacts will not decline. Economic recession is the only proven mechanism for a rapid reduction of greenhouse gas emissions and may now be the only real hope for maintaining the earth in a habitable state.

Holmgren makes the case that while it may be too late for the Green Tech scenario to materialize, it may still be possible to avoid the worst effects of the Brown Tech scenario (a 4 to 6 degree “Climate Cooker” Lifeboats scenario). A severe global economic collapse could switch off enough GGE to begin reversing climate change, so that the Earth Steward scenario of bioregional economies based on frugal rural agrarian living, assisted by resources salvaged from the collapsed global economy and the defunct national governments, might emerge in the long term future.

It’s not a picture of a bright and shiny future, granted. The last 10 pages or so, however, I found to be quite stimulating, and opened up more possibilities for positive engagement. Topics discussed are Nested Scenarios (different scenarios co-existing at different scales); Investment and Divestment; Formal and Informal Economies; Alternative and Non-monetary Economies; Labor and Skill Vs Fossil Fuel and Technology; Brown Tech Possibilities; Actors at the Fringe; and Not Financial Terrorists (but Terra-ists with hands in the soil). There are also many great footnotes/links worth following up on.

This is a highly recommended essay – essential reading for those trying to make sense of our long term future and how we can best make a positive difference.

[*Update 8/06/14*: After you’ve read Crash On Demand, you might want to also consult the single page Crash On Demand: Concise Version which clarifies and attempts to answer questions, such as “Is David saying that the system will crash anyway and by scaling up permaculture activities will fasten the inevitable, or is he really calling for non-violent efforts to crash the economic system,  to save the planet, or is he not calling for that?” Hopefully this post, as well as my blog posts “Crash on Demand“ and “What is David Holmgren Really Telling Us?” will also answer these questions.]

David Holmgren 2011 Interview: Strategies for the Transition
Nicole Foss on Deliberate Attempts to Cause System Failure

Other Related Articles
Conversation with David Holmgren (a 15 minute radio interview, where Holmgren is forced to give concise answers to key questions)
Retrofitting the Suburbs for a Resilient Future (Excellent David Holmgren video presentation of his famously practical vision for the future of suburbia)
Powerdown: Let’s Talk About It (popular recent post by Joanne Poyourow of Transition US)
Downloading Responsibility (Extraenvironmentalist interview with Nicole Foss and Laurence Boomert)
Climate After Growth: Why Environmentalists Must Embrace Post-Growth Economics and Community Resilience (Rob Hopkins and Asher Miller appeal to environmental activists, urging to let go of the growth paradigm)