The worship of the ancient golden calf has returned in a new and ruthless guise in the idolatry of money and the dictatorship of an impersonal economy lacking a truly human purpose. The worldwide crisis affecting finance and the economy lays bare their imbalances and, above all, their lack of real concern for human beings. – Pope Francis

Pogo was a famous comic strip written by Walt Kelly, that ran from the late 1940s through the early 1970s.  In 1970, Kelly designed a poster to celebrate the first Earth Day, using the slogan “we have met the enemy and he is us.” 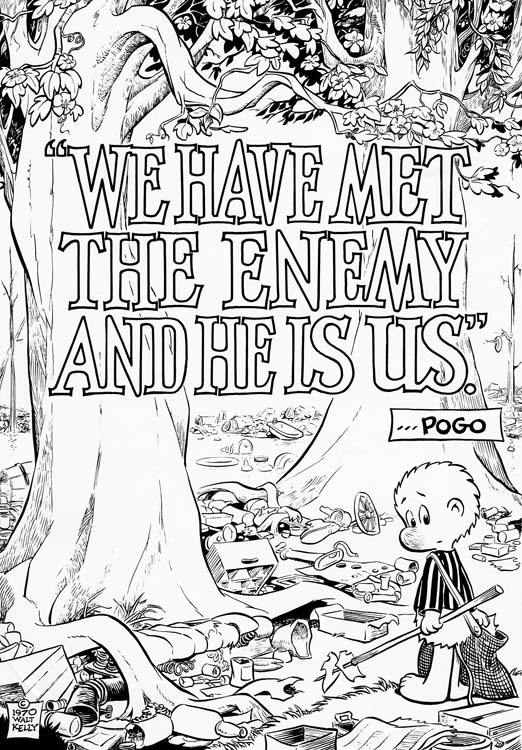 On Earth Day 1971, Kelly used the slogan once again, this time in the comic strip itself: 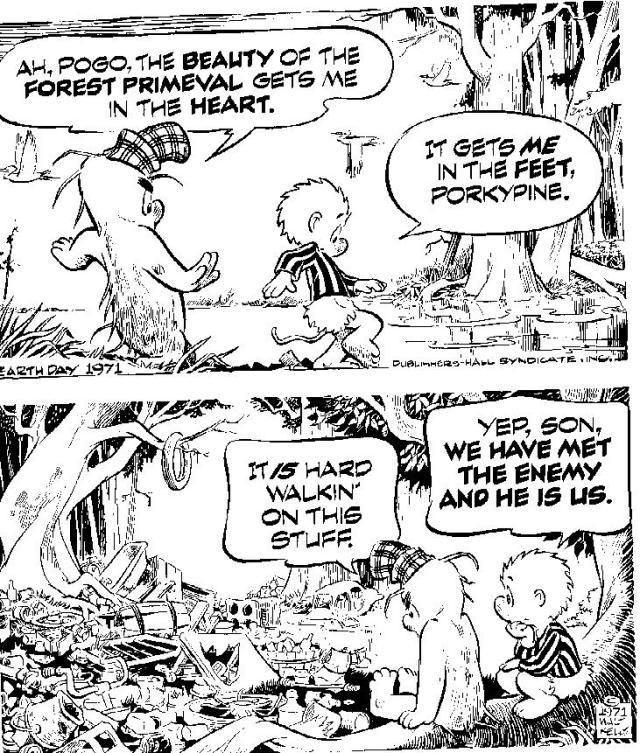 In the 1980s, Joe Dominguez began teaching courses on financial integrity, and later co-wrote with Vicki Robin the best selling book Your Money or Your Life. He framed his teaching around what he called “Pogonomics.”  In a 1990 column on the subject “What is Enough?” Dominguez wrote,

While no one was paying much attention, economics replaced religion as the touchstone of human life. Like religion, economics has priests and rituals. The purpose of these priests and rituals is to interpret the meaning of events while keeping the people in confusion. Any effort on the part of the masses to connect directly with the realities behind the rituals is considered a sacrilege.

Dominguez’s concerns are well expressed in this excerpt:

The purpose of money is to consume resources. Any time that you spend money, you are consuming resources. Since you have traded a piece of your life to get that money (through your employment), you are also consuming your own resource (your life-energy) when you spend money. The new resource you bought with the money now belongs to you – it is not available to others. It is now your right to use it up, to prevent others from getting it, to hide it from other people in your closet, to make other people feel bad because they don’t have it.

When you want to consume more resources than you can get with the money you got by selling your own resource (your life energy) through your employment, you can sell your future and your children’s future. This is called “trading futures,” or debt. You have to use up even more resources when you are consuming via debt – the extra amount being called, interestingly enough, “interest on consumer debt.” This is a very efficient way to “use up, devour, destroy, waste and squander.”

Hence, the concept of Pogonomics is indeed summed up as “We have met the enemy and he [or she] is us.”

Pope Francis has a very similar analysis, which we are here referring to as “Pope-onomics.”  This article by Nathan Schneider (thanks to theurj for the link) outlines some of the Pope’s economic ideas which argue against free market growth at all costs, monetary policies that encourage crippling debt, and  of “a financial system that rules rather than serves.” 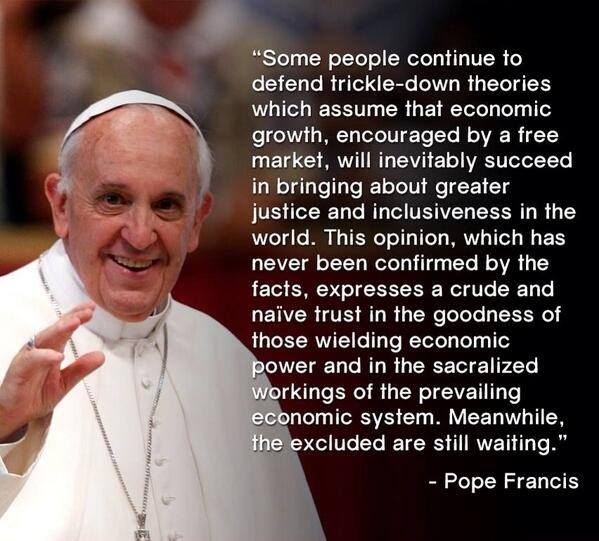 Rush Limbaugh is wrong when he characterizes the Pope’s economics as “pure Marxism.”  However, neither is it pure capitalism, which comes as a shock to the mainstream view that our current “business as usual” economic order is non-negotiable. Schneider comments, ” It’s not an economics of the right or left, of Democrats or Republicans, but an economics of cooperation.”

Like Pogonomics (and permaculture), Schneider also points out that “The future Francis hopes for is one that comes chiefly from the bottom up.” He told a group of activists in Bolivia, “The future of humanity is in great measure in your own hands, through your ability to organize and carry out creative alternatives.”

Here are a few comments from the Pope Francis Encyclical, Laudato Si‘ (yes, it is worth your time to set aside an hour or two to sit down and carefully read through the pdf of this entire document):

“In a word, businesses profit by calculating and paying only a fraction of the costs involved. Yet only when ‘the economic and social costs of using up shared environmental resources are recognized with transparency and fully borne by those who incur them, not by other peoples or future generations,’ can those actions be considered ethical.”

“A change in lifestyle could bring healthy pressure to bear on those who wield political, economic and social power. This is what consumer movements accomplish by boycotting certain products. They prove successful in changing the way businesses operate, forcing them to consider their environmental footprint and their patterns of production.”

“Obsession with a consumerist lifestyle, above all when few people are capable of maintaining it, can only lead to violence and mutual destruction.”

“Since the market tends to promote extreme consumerism in an effort to sell its products, people can easily get caught up in a whirlwind of needless buying and spending.”

Pope Francis seems to resonate with Joe Dominguez’s moral and ethical concerns about economics having replaced religion as the touchstone of life. In 2013, in his first major written work,  Evangelii Gaudium, he specifically asks us to say “No to an economy of exclusion” and “No to the idolatry of money,” which he said could lead to “a new tyranny.” “Money must serve,” he says, “not rule.”

What Pope-onomics does encourage is self-governing economies and cooperative enterprise, which are owned and controlled by the people who depend on them (workers and customers), and are not set up to maximize profits. Co-operatives have a long tradition in the catholic tradition and indeed in the very roots of the very earliest Christians.

They devoted themselves to the apostles’ teaching and to the fellowship, to the breaking of bread and to prayer. Everyone was filled with awe, and many wonders and miraculous signs were done by the apostles. All the believers were together and had everything in common. Selling their possessions and goods, ghey gave to anyone as he had need. Every day they continued to meet together in the temple courts. they broke bread in their homes and ate together with glad and sincere hearts, praising God and enjoying the favor of all the people. And the Lord added to their number daily those who were being saved.

Schneider references the 1916 book Distributive Justice by priest-economist John Ryan, and quotes his conclusion about the Advantages and Prospects of Co-operation: “Co-operation is a golden mean between individualism and socialism. It includes all the good features and excludes all the evil features of both….[cooperatives cultivate] a greater development of the altruistic spirit than is possible under any other economic system that has ever been tried or devised.”